The 15th Rainforest World Music Festival (RWMF) has ended, but apart from the fact that the Festival was (and always is) AWESOME – see and listen for yourself:

– it’s also the experience and memories made there that make people come back year after year.

I had expectations (and for the record, every single one was met! 😉 ), but personally, it’s the unexpected that made the sweetest of memories! 😀

Like when meeting new people and they end up being good friends:

The @SWKBLOGS media team! I know who to look for the next time I’m in Kuching! 😉

Or bumping into/meeting old friends you hadn’t seen in a while, mainly by chance:

I was at RWMF with Fab 4 years ago, and it was good to see him again on Day 2. Apparently, he has never missed a single RWMF for something like a decade! WOW! Au contraire, this was the first time for his friend whom I just met, who was involved in the Capoeira Workshop.

My own sis-in-law (and bro who took this photo)

And Ben, who went with me this year:

By the looks of it…

There were a few others like my ex-colleague, friends from Brunei and friends-that-are-practically-family, but I forgot to snap a photo with them. Heh.

But the most unexpected and most memorable experience happened on Day 3.

I had just arrived at the Sarawak Cultural Village (SCV) and was waiting in the performers’/media van to take me to One Hotel Santubong (OHS). A few minutes later, a performer climbed into the van and he sat beside me. It was a Hey-I-Just-Met-You moment. 😉

As the van brought us the short distance to OHS, I managed an unofficial interview with him. I was gushing about how talented a sape player he was and he was very humble about it. He shared how “someone” had brought a sape back to the States and how he had learned to play it and that it is not played like a guitar and that these instruments should not be played as if they were one and the same. Care to guess who he was?

And he was so kind to introduce me to the “someone” who had brought a sape back to the States – Zee Avi herself! 😀

As you probably know already from Day 1, I really enjoyed their performance so it was quite an honour to meet her in person. Fondly referred to as Zee, this Mirian singer-songwriter, guitarist & ukelele player is a Sarawakian treasure, putting Malaysia (and especially Sarawak) on the musical map – all the way from the United States where she is based.

Apart from a photo with her, I also got her autograph. 🙂

And if that ain’t enough, I was even able to chat with her for a bit – she’s such a sweet lady!

Prior to the RWMF, she was in Miri for a Homecoming Concert but before that she said she’d been away for 13 years!

Those few minutes spent with her was priceless.

“Balit sitok gik kelak. Iboh tunggu 13 tahun…” I said as I left her to enjoy her privacy. 🙂

*in the local Sarawak Malay language, meaning, “Do come back again. Don’t wait for 13 years…”

Thus, I would like to thank Sarawak Tourism Board and Sarawak Bloggers again for making the experiences of the 15th RWMF a possibility for me!

While going for all 3 days was nothing impossible in itself, the media pass really opened up a whole new side of the Festival for me.

The only photo taken inside the Heinekebana apparently. 😉

For a more in-depth coverage of the 3 days (and a behind the scenes look), do check out my RWMF 2012 series of posts and for videos, do drop by my youtube channel. Last but not least, here’s a photo that I think says a lot about the spirit of the RWMF:

I regrouped with the @SWKBLOGS Media Team  at the Performers’/Media Camp* for dinner. It was the final night of the Rainforest World Music Festival (RWMF) and we were all excitedly looking forward to the performance that night. *Photo c/o Yvonne

Soon enough, we all found ourselves right at the front of the Jungle (main) stage where Drums of Malaysia warmed the crowd up with an energetic performance:

But THIS was what I was waiting for…

Thanks Ben for this photo!

Photo courtesy of Sarawak Travel (got this from Yvonne)

HATA (made up of musicians from Korea, Malaysia, Turkey, Taiwan and Azerbaijan) takes to stage as the first act. Why was I looking forward to them? Just check out their opening!

I love that big drum…and doesn’t this just tingle down your spine? 🙂

The other instruments were also cool!

Here’s a more upbeat piece by them:

But in the end, it’s still the drums that do it for me! 🙂

Next up was Oreka TX from Spain!

I was left mesmerized by the txalapartas – how can wood and stone (and apparently ice too from the video they showed in the background) make these melodic tunes?! – just WOW!

Now at this point, I just thought they were showing-off (in a good way 😉 ):

However, we were getting hungry (and the Heinekebana was calling) so we went off – which was why, once again, I missed seeing the Mongolian throat singing of Khusugtun when 1 of them came on stage to perform with Oreka TX in the last 15 mins! 😦 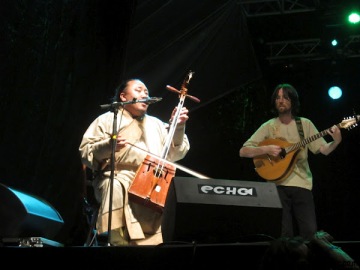 Thanks Lindy for this photo!

At least I could hear him through the speakers set up throughout SCV loud and clear this time though. 🙂

Next was Rhythm of Borneo, Samuel Dass (yes, he was the one with HATA earlier) & Prakash (Malaysia) and the Carimbo Drums of Brazil. No photos/videos though as after we got back with food and a can of chilled Heineken each (apparently, you could choose to have draft beer at the cabana or “take away” 😉 ), we were content to just sit down (in view of the stage of course), hang up our cameras and just enjoy the music. 🙂

After that was Mamadou Diabate’s Percussion Mania of Burkina Faso – now that was something!

We made our way through the crowd and back to the front of the stage again then, as we were pumped up and ready for the final act and grand finale, but before that was the Native Chanting and Sape & Warrior of Sarawak.

Finally, the long-awaited final act for the night shook the main stage, literally!

No, this is NOT a stick-up. 😉 [Photo source: Travillion’s FB compilation album]


I searched high and low for this video (cos I was too busy dancing to take my own) so thanks to sildjune for uploading this! 😀

I did manage to take these 2 videos though:

And doesn’t he just remind you of King Julien of Madagascar? I LIKE! 😉

But alas, all good things must come to an end. With that final performance, they welcomed back all the performers for the 15th RWMF back on stage for the Grand Finale:

I just love how they’re all just enjoying themselves!

Time to bring on the Confetti!!!

Here’s how it was like as we walked away from the main stage:

Yes, some people were wrestling in the mud. RWMF is apparently never complete without it…

Where did the mud come from? Your guess is as good as mine, especially considering it didn’t rain throughout the 3 nights… 😀

With that, the 15th RWMF has come to an end, and yet it is only but the beginning of the countdown to the next – Yes, we have the dates! The 16th Rainforest World Music Festival will be held on 28-30 June 2013. 😀

If you’ve never been to a RWMF before, I hope my RWMF 2012 series of posts has made you realise that it is absolutely worth going to (don’t worry about the mud, that’s purely optional and it’s fine if you don’t roll that way, neither do I 😉 ) but if you’re still not convinced, I’ll just leave you now with what my crush from HATA thinks of the RWMF:

For the record, this is an exclusive shot as he especially posed as such for my camera only! 😀

Up next, the final post on my own personal highlights of the RWMF 2012. 😉

By now, you would already know the drill of the Rainforest World Music Festival (RWMF)  – concerts at night; workshops during the day – but that’s only what the (programme) book tells you.

There is actually much much more on offer, which was why I decided to go “off the book” for Day 3…

The Hornbill with Mount Santubong in the background

Before we even enter the Sarawak Cultural Village (SCV), opposite its main entrance was Damai Central, where there was a Beach Fiesta (RUSH) happening, in conjuction with the RWMF.

Among the things on offer there:

Perhaps pick up a martial art?

But if something more permanent is what you’re looking for…

How about a Tattoo?

But of course, the Home of the RWMF is here:

There were many stalls set up around SCV during the RWMF:

These stalls were a favourite of many:

Or maybe you would prefer these:

Not your ordinary barber/hairdresser, these talented Edward Scissorhands will creatively shave your hair in a way you never thought possible. (I was soooo tempted to get mine done…)

And perhaps after walking around the stalls, your feet are aching – not a problem!

Get a much needed foot massage! (among the other types of massages they offer)

And when you’re ready to continue exploring, the SCV is more than ready to welcome you into the many houses of Sarawak’s many tribes!

Perhaps some traditional kuih at the Rumah Melayu (Malay house)?

Or some nicely hand-crafted accessories…

Oh look who was there too!

If that ain’t tall, I don’t know what is!

Not for those afraid of heights…

But the inside is worth it…look at that wall!

Fatimah conquered her fear of heights and enjoyed herself 😉

I wonder why he stopped right before coming down…hehehe

Shown here is the traditional “tabuh” (percussions) of the Iban tribe

Long enough of a house for you? 😉

There were many people here as there was a workshop going on.

Inside the new Bidayuh Barouk

There was an Arts exhibit being held there by my former university (UiTM).

And finally, we reach our destination…

From there, I was drawn over to the Dewan Lagenda where the Metal In My Mouth workshop (on brass instruments) was going on…

And I arrived just in time to catch this:

Music is the heart and soul of the Festival so stay tuned as I bring you next, the Finale of the 15th Rainforest World Music Festival! 😀